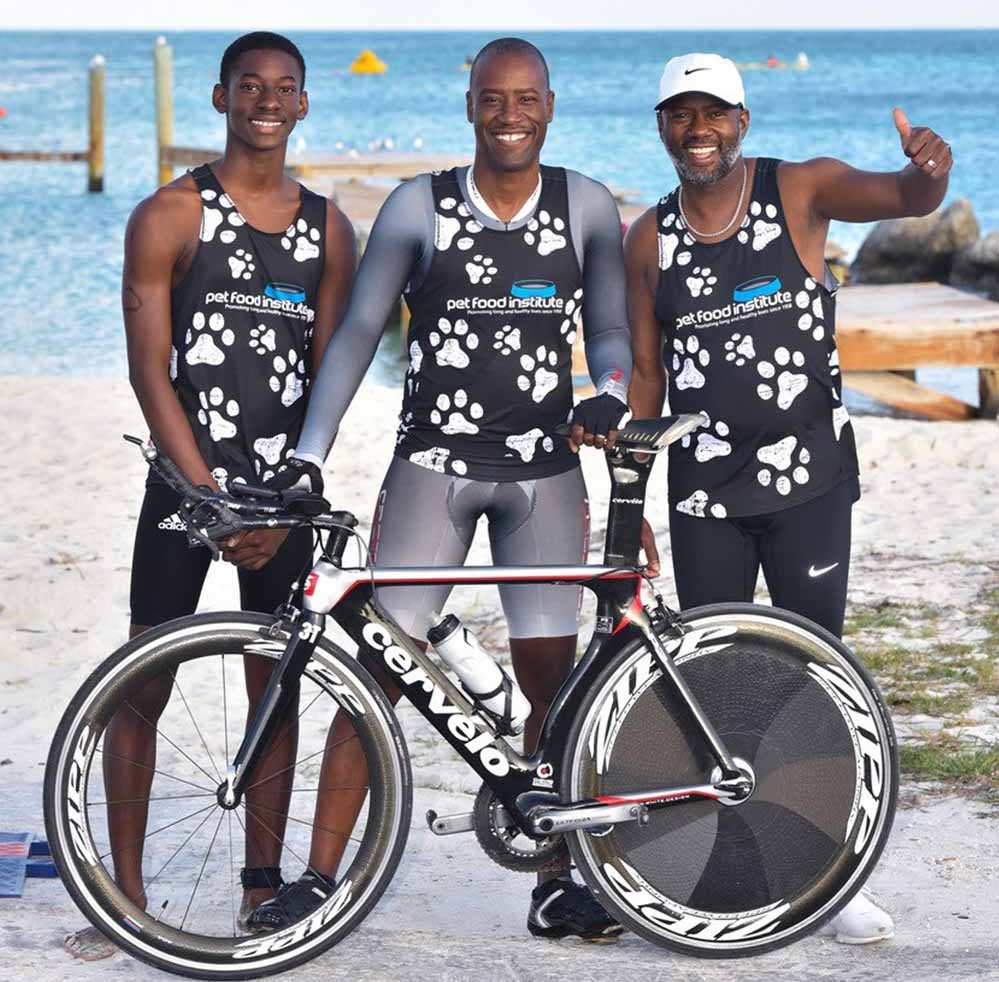 Miracle Man Kimwood Mott, far right, with teammates son Kadin, the swimmer, left, and cyclist Patrick Paul, centre, prepare to enter the challenging BAARK Powerade Potcakeman Triathlon on Jaws Beach April 15. The event, sponsored in part by Washington, D.C.-based Pet Food Institute (PFI), attracted 151 athletes, 22 relay teams and hundreds of spectators, many accompanied by their four-legged friends. This is the third year that PFI Caribbean has helped to support the event that raises awareness and funds for pet nutrition, wellness and care in the Bahamas, as part of supporting responsible pet care.

While the race supported pet wellbeing, it was Mott whose story stole hearts at the competition for a cause. The victim of a serious vehicle crash, Matt was told by doctors that he would never walk again. The bank staffer, husband and father refused to give up. Thirteen surgeries later along with years of physiotherapy to rebuild his shattered leg, Mott renewed his passion for running. His story first won the admiration of local PFI representatives who awarded his team the PFI-branded athletic gear for this year’s beachside competition that includes a 1k swim, 28k bike ride and 7k run. Mott’s team, named Father, Son and Holy Cyclist, took silver with Mott turning in his personal best, 7k (4.349 miles) in 36 minutes, 47 sec.

PFI Caribbean is a partner of the Washington, DC-based Pet Food Institute, whose member companies make 98% of dog and cat food produced in the U.S.  Since PFI began its outreach education programs in The Bahamas, Turks and Caicos, Jamaica and Trinidad and Tobago four years ago, the industry association has partnered with numerous animal care organizations like BAARK dedicated to improving the quality of life of man’s best friends through outreach programs and supporting sound nutrition for pets.

400 students in The Bahamas take part in virtual pet care learning, thanks to Pet Food Institute

Paws and think before you feed them these foods

400 students in The Bahamas take part in virtual pet care learning, thanks to Pet Food Institute